People say fall is the season for eating. I would say it’s the season when you think about your food.

Because my grandparents used to live in one of the largest fruit production regions, we used to receive boxes full of apples, oranges, pears, cherries. I never thought that was anything special. Your grandparents always send you something (that’s what I used to think).
Now I miss those boxes so much, especially the cooking apples.

I ordered a box of apples, my favorite kind, for the first time, directly from a farmer in that region. Then I realized, this is a new generation of consumption style. Surely, a lot of people are already been doing it – buying your food directly from producers.  But it’s a revelation.  You don’t have to go to the farmers’ market, but you can cherry pick everything you eat through online shopping if you are really into it.

I also realized, you can play a far greater part in preparing your food.
For example, I started making my own yogurt (I ended up buying a yogurt making machine for just under $20, extremely useful).

Home made granola is the next?

This particular kind of apple does not last very long.  It’s only available in October every year in Japan, and you have to eat them fast.  I tend to bake the most in October due to this very reason.
The easiest is, of course, jam.

There was a jam recipe with apples and carvados (apple liquor from France), but carvados was really hard to find.  I ended up improvising with leftover red and white wine and spices, so it tastes like the cooked apple in vin chaud.

And the next is, naturally, a tart tatin.  I tried this recipe from Smitten Kitchen the second year in a row.  It’s definitely my most favorite, although I don’t follow the instruction too strictly.

It turned out soooooooooo good, I could not believe it myself.  It tastes divine, and I am not exaggerating!

And, I learned how to make other kinds of confiture, for example, with grapes. 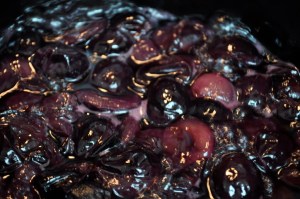 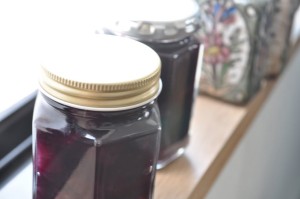 But you see, I am not much into “cooking”.  Rather, I am obsessed with “bottling” now.  Baking is also like science experiments and it’s fun.  When it comes to “eating”, it’s less important for me at this moment.  I just want to make something.

As a result, I have plenty to eat at home these days, I really don’t want to go out to eat.  If I had time, I will bring lunch to work.  Dinner at home is the best.

Wish I can work from home.